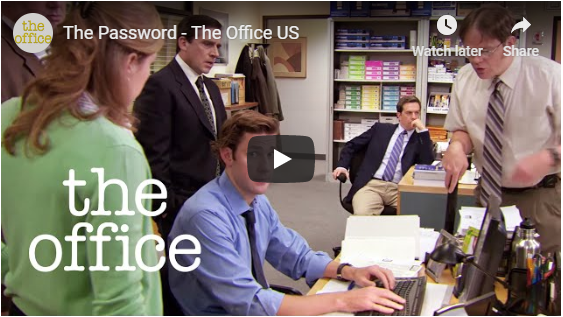 Technology Lessons from The Office

I'm currently re-watching The Office (US) for what feels like the 100th time. This time, I realized that some parts have a whole new meaning now that I work for an IT company that provides tech support to businesses like the fictional Dunder Mifflin Paper Company.

In this clip from Season 7, Episode 9, "WHUPF.com," Jim tries to reset the server after a power outage causes it to go down.

He's stuck and The Office can't do any work since he doesn't know the password to sign into the server. This causes Michael to recall all of The Office's former IT guys to determine who originally set up the server.

As Michael thinks through the list of IT guys backward from the most current by the nicknames he gave them, "Glasses, Turban, Ear Hair, Fatty 3, Shorts, Fatty 2, Lozenge, and Fatso," Kevin remembers that 'Lozenge' set up the server eight years ago. Michael recalls that whatever the password was made him laugh when he heard it but, "Pam got really offended." Jim ultimately enters Kevin's suggestion of "big boobz," based on Michael's clues. The password is accepted, the server is reset, and Dunder Mifflin lives on to sell paper another day.

So, here are the IT lessons I took away from this short scene.

Never Rely on Just One IT Guy

You wouldn't leave your business' financial records in the hands of just one person. Why would you leave the keys to your entire network in the hands of one person? Michael had to go back seven IT guys before getting to the person who would have any knowledge of how to correct the issue at hand.

What if no one in The Office had been able to remember anything about the password? Would they have even been able to find 'Lozenge' to ask him? Would he have remembered? Does he have any obligation to share information about a password he created eight years ago? Would he want to share information with Michael after being the subject of his somewhat offensive nicknames?

While most businesses do not need more than one internal IT person, if they even need one at all, more than one person MUST have access to documentation about your network. Even if you outsource your IT support, make sure that key information does not reside with just one individual within your outsourced IT vendor.

Change Passwords at Least Every 90 Days

Aside from the Z on the end of "big boobz," this password does not meet basic complexity requirements. Since we can't see how Jim types the password, we can only assume there are no capital letters. Even if one or more of the letters were capitalized, there are no numbers or special characters making the password extremely easy to guess. This is confirmed by the speed at which The Office's crack team was able to figure it out.

A good practice is to turn phrases into acronyms, replacing numbers and special characters for letters. For example, maybe the phrase, "We're off to see the wizard, the wonderful Wizard of Oz," is easy for you to remember. A good corresponding, but complex password choice might be, "W0t$twtwWoO."

Implement Lifecycle Management for IT Equipment

The server in question was installed eight years before this scene. Since Season 7 of The Office aired in 2010, this server dates back to 2002 and was most likely running on Windows Server 2000. That server operating system reached its end of life on June 30, 2005, which means the server has been unsupported for at least 5 years!

Luckily for Dunder Mifflin, the threat of ransomware and other cyber attacks were not as great back in 2010. Although, this outdated server and operating system most likely created some pretty serious efficiency and security issues in The Office - not that productive employees like Stanley would ever complain about taking a few extra minutes to wrap up his crossword puzzle while his most recent quote uploads to the server.

Many businesses are currently facing a similar threat as Microsoft Windows 7 and Server 2008 R2 approaches end of life on January 14, 2020. Except this is a VERY different environment than Michael Scott was living in back in 2010. With a device and operating system that out of date, Dunder Mifflin most certainly would have fallen victim to ransomware today. Make sure you, your IT person, and/or your IT vendor has some mechanism to keep track of suggested replacement dates for all of your equipment, as well as operating system and software upgrade schedules necessary for network and data security.

Be Better than Dunder Mifflin Scranton

The Office is often cited as a case study in management, leadership, and human resources, but there are also some pretty useful technology nuggets in the show. If you find yourself managing IT in your business in any way that resembles the Dunder Mifflin experience, you should definitely evaluate your IT strategy. Technology is just as important to employee productivity and business results as your management and leadership styles.

In Season 4, Episode 3, Michael Scott said, "People will never be replaced by machines. In the end, life and business are about human connections. And computers are about trying to murder you in a lake. And to me the choice is easy."

Evaluate Your IT Equipment & Plan for Upgrades